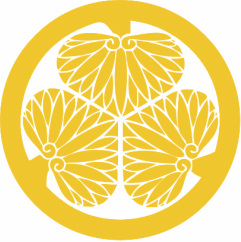 The Tokugawa Crest
When Tokugawa Ieyasu became shogun it was the start of a revolution in Japan. A new age of Tokugawa shoguns that brought peace  in the Tokugawa period, unlike the shogunate's before. It was based on the strict class hierarchy originally established by Toyotomi Hideyoshi. The daimyo, or lords, were at the top, followed by the samurai, with the farmers, artisans, and traders ranking below.

Being the Shogun, Ieyasu controlled about 25% of the land, the rest being split up by 275 daimyo lords.  A rich Daimyo and his Samurai could be a great threat to the Shogun so Ieyasu placed many restrictions:

It was these new rules which kept the Daimyo's under control, bringing peace to Japan for years to come. Although all sectors of society were confined to their traditional roles much more strictly than in the past, already beginning in the time of Hideyoshi. The Tokugawas continued this harsher rule of the class structure, imposing and enforcing rules about small details like which classes could use luxurious silks for their clothing or tortoiseshell for hair-pins.

Tokugawa Iemitsu was the third shogun of the Tokugawa shogunate. He was the eldest son of Tokugawa Hidetada, and the grandson of Tokugawa Ieyasu. In 1633, after his brother's death, he dismissed the Daimyo his pre-disessor had left in charge and replaced  them with his childhood friends. This made him unpopular with many daimyo, but Iemitsu simply removed his opponents. He is credited with establishing the alternate attendance system which forced daimyo to reside in Edo (medieval Tokyo) in alternating sequence, spending a certain amount of time in Edo, and a certain amount of time in their home provinces. It is said that one of the key goals of this policy was to prevent the daimyo from gaining too much wealth or power by separating them from their homes, and by forcing them to regularly devote a large sum to funding the immense travel expenses to and from Edo. The system also involved the daimyo's wives and heirs remaining in Edo, disconnected from their lord and from their home province, serving essentially as hostages who might be harmed or killed if the daimyo were to plot rebellion against the shogunate.

Tokugawa Tsunayoshi was the fifth shogun of the Tokugawa dynasty of Japan. He was the son of Tokugawa Iemitsu, and the great-grandson of Tokugawa Ieyasu In 1682, Shogun Tsunayoshi ordered his police to raise the living standard of the people. Soon, prostitution was banned, waitresses could not be employed in tea houses, and rare and expensive fabrics were banned. Most probably, smuggling began as a practice in Japan soon after Tsunayoshi's authoritarian laws came into effect.
In the 1690s, Tsunayoshi, who was born in the Year of the Dog, thought he should take several measures concerning dogs. A collection of rules released daily, known as the Edicts on Compassion for Living Things told the people to protect dogs, since in Edo there were many stray and diseased dogs walking around the city. Therefore, he earned the title of 'Dog shogun'. In 1695, there were so many dogs that Edo began to smell horribly. An apprentice was even executed because he wounded a dog. Finally, the trouble was taken to a distance, as over 50,000 dogs were deported to kennels in the suburbs of the city where they would be housed.

Tokugawa Ietsugu; was the seventh shogun of the Tokugawa Dynasty, who ruled from 1713 until his death in 1716. Although Shogun Ietsugu assumed the role as formal Shogun, he was still a toddler. As he was not old or able enough to rule, he was put under the protection and advice of Confucian scholar Arai Hakuseki. Two problems were looked at during Ietsugu's reign: currency and foreign trade in Kyushu, one of the islands of Japan. Ietsugu did not take much care of the country's matters; and his advisors, namely Arai Hakuseki, addressed them. On the 30th of April, 1716, Shogun Ietsugu died of of a cold, at the age of six. He had not done much to rule—but was thought of as a playful and mischievous character. Since he left no children or direct heir, the line of Tokugawa Ieyasu died out with him (one hundred years after Ieyasu died himself). Nonetheless, there were still branches descended from Ieyasu through one of his many children, and the new shogun, Tokugawa Yoshimune, was chosen from one of these lineal Tokugawa branches.