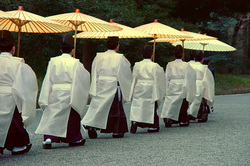 Shinto priests marching at Meiji Temple Shrine
Shinto has been a major part of Japanese life and culture throughout the country's history, but for the greater part of that history Shinto has shared its spiritual, cultural, and political roles with Buddhism and Confucianism.

Before the formal introduction of Buddhism there was no actual Shinto religion, but many local cults.These religions were highly localised, and not organised into a single faith. Nor were they seen as a single religion; Earth and supernatural were so closely integrated in the view of the early Japanese that the things that modern people regard as a faith were seen in those times as just another part of the natural world, albeit a part of enormous power.

Shintoisms were the only religions in Japan until the arrival of Buddhism in the 6th century CE. From then on Shinto faiths and traditions took on Buddhist elements, and later, Confucian ones. Some Shinto shrines became Buddhist temples, or had Buddhist priests in charge. Buddhist temples were built, and Buddhist ideas were explored.

Nowadays Shinto and Buddhisim are still the biggest religions in Japan as well as a small percentage of Christianity.

Sir Alfred East- 'A View Of A Shinto Shrine' 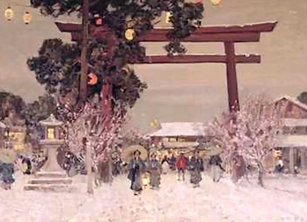 'A View Of A Shinto Shrine' by Sir Alfred East c. 1865
This painting by Sir Alfred East gives us an insight into the life of Medieval Japan. Painted towards the end of the Tokugawa Shogunate, East spent long periods of time in Japan and painted this on one of his lengthy visits. We see a Shinto Shrine depicted in winter, as there is snow resting on the trees and ground. For a Historian researching this time we can see through this source the attire the Japanese wore when practicing their religion, the climate during certain months and also the importance of Shinto in the Japanese lifestyle.

From this painting we can look closely at the attire the Japanese wore. The two men walking towards us are dressed in proper blue robes, garments that seem to be worn by majority of the people in the people in this painting. This can show us that perhaps there was a  certain 'uniform' when going to a Shinto shrine.

In this painting we can see it is winter by the snow resting on all the surfaces, for a historian this is an important fact to note when researching the time period as it may impact elements of other primary sources from the time. For example a written entry telling us about the activities done by the Japanese, may mention 'snow' or the fact that the weather was very cold, telling us that the activities might have changed over the winter compared to the summer.

This painting shows us the importance of religion in the Japanese lifestyle, the grand entrance and multiple large houses show us that the Shinto shrines are very important to the Japanese. We can also see by the large amount of people surrounding the entrance in front of the buildings. From this painting we can see these simple factors which already show us that religion was an important aspect of life for the Japanese.

This painting has given us idea's and insights into the Japanese religions and lifestyle. With further research brand new facts can be discovered about the certain attire to a shrine, the impact the weather may have had on certain sources and the importance and ritual concerned with Shintoism.